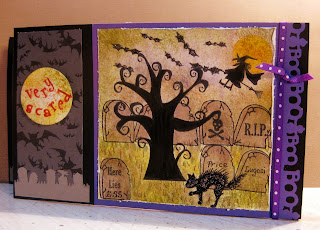 Frustration! Frustration is what you feel when you've spent a long time making a card that you didn't know where you were going with it when you started but by the end it was taking on a life of its own and looking awesome but you can't get a decent picture. It's the purple. I can never get purple to look right. I tried to adjust it but I just don't know how to get it right. The letters are embossed in red and that's not looking too good either. I know you should take the picture in daylight but I'm pretty much out of the house during the daylight hours. So you will have to take my word for it, the mat behind the graveyard and the ribbon are purple. There are 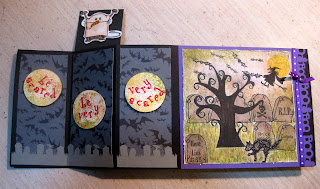 many layers of ink sponged, brushed and stamped all over this card. Seriously, this sucker took on a life of its own. When I started out I was trying to figure out what to do for the Macabre Monday Challenge #7 Menacing Movables. I've been playing along with the challenges on Haunted Design House since they started and didn't want to chicken out on this one. I remembered making a card like this one time at a Stampin' Up demonstration but didn't remember how it was done or what it was called and somehow I saw something about a "wiper card" and followed it to find the tutorial on Splitcoast Stampers by Beate Johns. That was serendipitous (I love that word). So I read the tutorial a couple times and decided I could do that. First I needed to pick a small but fun stamp for the pop up piece and decided to go with this ghostie. I'm not sure what kind of animal is under that sheet and I'm sure I don't want to know. The stamp is from the Inkadinkado Ghouls and Goblins" set. It's all cats, dogs and birds in Halloween attire and one is funnier or cuter than the other. Since I was using this silly creature, the card can go in the Secret Crafter Saturday Challenge #51 Animal Antics. A cat also ended up in the graveyard scene, but the ghostie definitely qualifies for antics.
For no particular reason I decided I was going to make a square scene for the front of the card. Not a thought out decision that ended up costing me lots of time and brain punishment when it came to laying out the card. First of all I had to adjust the measurements of the card because my stamp was bigger than the tutorials and when it came to changing the shape I chickened out so I had to fill up the rectangle which turned out looking okay in the end.
Now that square scene was a ton of fun to make. I got lost in it. I pulled out every Halloween stamp set I had. What a mess my little work surface became. I didn't use them all but I used a lot of different stamps. The tree which makes it work for the Tuesday Taggers Challenge to make a project that includes trees. Hopefully one big tree will be enough, cause I could have stuck a couple more little trees in there but opted to forgo them. After all it is a graveyard and I can vouch for the fact that there are many, many trees in that graveyard, at least the one that my dad sent me to and told me the grave I was looking for was under the big tree, granted the directions were a little more explicit but they weren't good enough to lead me to the grave his aunt was buried in under the big tree, but me and my buddy had a grand time visiting lots of graves under big trees. Since that day I have noted that every cemetery I've been to has many big trees. Vanessa and I crack up over that trip to this day and that was about 10 years ago, hey, I told you I'm easily amused. But I digress... as I was saying the tree and the bats are from the MFT "Too Cute to Spook" set. The headstones, words on the headstones, skull and crossbones, and cat are from the MFT "Ghoulish Label" set. The witch and the moon are from the SU "Home Is Where the Haunt Is" set. The letters are from MSE "Multi Retro". After I got it all stamped on MFT Perfect Panel paper I colored it in with copics. Then I sponged and brushed and distressed the paper. I used Ranger Tea Dye and Peeled Paint, SU Pumpkin Pie and Basic Gray. Memento Black for the images and Dandelion for the moon, I ringed the moon with a second color but don't remember what it was. I covered the bats and cat with gunmetal stickles and smeared orange distress stickles over the moon and later over the word circles which were stamped in Versamark and embossed with red powder. The embossing is for the ABC Challenge E is for Embossing. I should have embossed the tree too but I chickened out. The purple cs got punched with the EK Success Boo border punch and the gray cs on the bottom was punched with the Martha Stewart Graveyard border punch. The bat paper is SU and after I put that down I decided the panels needed something else and that was when I decided to put the sentiment there. You have no idea how many different ways I tried it out before I did the one you see. I really like the way they came out. The first ones I did were done in my own handwriting with blood drips but they didn't look as good as the idea was.
So you got to read most of how this card took shape and follow my process. Some days the cards are planned before I start them and some days like today they unfold and it's really satisfying when they turn out this good, but frustrating when you can't get a decent picture to show it off. Oh well...
I hope you enjoyed your visit and would love for you to come back. I love to read your comments so please leave a note but most important of all is to go click on the pink ribbon. 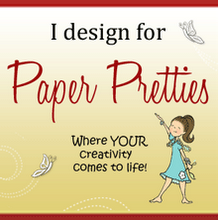 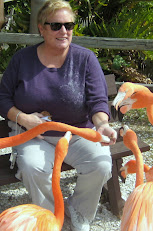 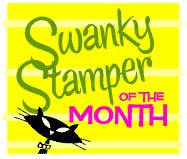